*AUTHOR OF ONE OF BUZZFEED'S GREATEST FANTASY BOOKS OF 2013*
From the author of the beloved Society of Sword and Wolf of the North trilogies, Duncan M. Hamilton's Knight of the Silver Circle --the sequel adventure-packed fantasy to Dragonslayer in The Dragonslayer trilogy--is perfect for fans of magical beasts and unexpected heroes 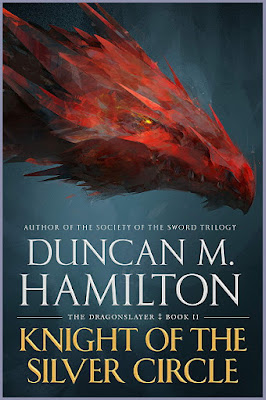 Three dragons wreak havoc throughout Mirabay--eating livestock, killing humans, and burning entire villages to ash. It was nearly impossible to kill one, using a legendary sword and the magic of the mysterious Cup; to tackle three, Guillot dal Villerauvais will need help.

The mage Solène fears having to kill again; she leaves Gill to gain greater control over her magic.

The Prince Bishop still wants Gill dead, but more than that, he wants the Cup, and he'll do whatever he has to to get it, even sending his own daughter--a talented thief and assassin--into the dragons' path.

As secrets mount on secrets and betrayals on betrayals, both Guillot and Solène face critical decisions that will settle not only their own fate but that of all Mirabaya.

You can purchase Knight of the Silver Circle at the following Retailers:

FINALLY!!!  I have been waiting for this second installment, and man, it did not disappoint!  I mean, it has Dragons, and magic, and fighting, knights, loyalty and betrayal...it IS the full package for a fantasy!!

Gill doesn't want the spotlight or fame of being a Dragonslayer...Solene is trying to deal with her conscience about killing...and she decides she needs to go back to learn to control her magic.  In the meantime, Gill is asked to help a village that is being tormented by MORE dragons, and he feels obligated to help.

Whew, it's hard to write a review about a fantasy that you love because the reader needs to experience each and every detail and unexpected twist on their own...and boy, there are some twists and crazy betrayal going on. This story is so fast paced, words disappear right off the page.

You will learn more about the dragons...their history, and just how complex they really are.  I Loved this...it was extremely powerful for the story and gave it tremendous depth.

Oh Gill....he has learned to battle his demons. He is hardcore, yet humble. I feel for him deeply. Prince Bishop is the character you will despise with your whole being.

This is a fantastic world to dive in dragon spiral style..this mesmerizing world is a great escape from reality. 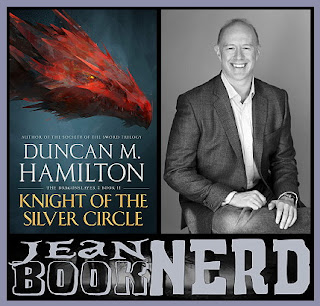 Duncan M. Hamilton is the Amazon best selling writer of fantasy novels and short stories, including The Wolf of the North and the Society of the Sword trilogy. He has Master’s Degrees in History and Law, and practised as a barrister before writing full time. Duncan is particularly interested in the Medieval and Renaissance periods, from which he draws inspiration for his stories.

He lives in Ireland, near the sea, and when not writing he enjoys sailing, scuba diving, windsurfing, cycling, and skiing.

His debut novel, ‘The Tattered Banner (Society of the Sword Volume 1)’ was featured on Buzzfeed’s 12 Greatest Fantasy Books Of The Year, 2013.

Duncan is a member of The Society of Authors, and the Science Fiction and Fantasy Writers of America (SFWA). He is represented by DongWon Song of Howard Morhaim Literary.

*JBN is not responsible for Lost or Damaged Books in your Nerdy Mail Box*
a Rafflecopter giveaway
Posted by Insane About Books at 6:30 AM