The Archangel Agenda by A.K. Alexander and Jen Greyson Review 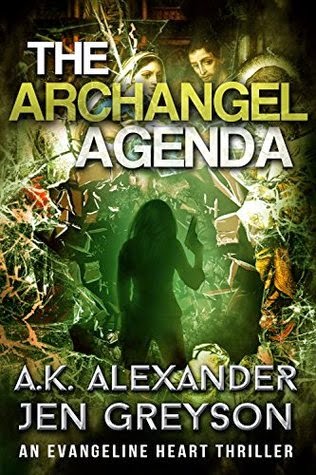 The first in a new urban fantasy by New York Times bestselling authors A.K. Alexander and Jen Greyson.
What happens when you're a professional assassin and your fiancé is murdered in retaliation for your latest kill? Just ask Evangeline Heart, who is visited by the Archangel Metatron soon after burying her soul mate, Griffin, and told she must rescue Griffin's soul from the dungeons of Hell.
In the first segment of The Evangeline Heart series, Evangeline (Lina) will join forces with a professional thief, a bumbling scholar, and an archangel who together will battle the forces of evil in hopes of saving the future for mankind.

Lina is an assassin.  After she is left alone, to be raised by a family friend, her life took a direction she would never have anticipated.  After her finance is killed because of something she did, her life is torn upside down.  Can she ever forgive herself?

After she is approached by Archangel Metatron, she learns what really happened with her mother's death....and there may be a chance that she can save her finance's soul.

On a search for ancient relics, Lina has the mission of a lifetime.  After a robbery gone wrong, she finds loyalty in a professional thief, and a professor that is wise in ancient relics.

First off, I love a story that involves ancient relics and their mysteries.  How fun it that?  This story was fast paced and full of action.  The adventure is thrilling, full of the unexpected, humor, and heartache over her mother's devotion.  I love the mystery surrounding Metatron, and how he tries to give clues, when he isn't suppose to help.

It's a fun read.  I look forward to the mystery behind the other relics that will come in the next installments.

Give this one a try!

Writing under the pen name A.K. Alexander, Michele explores the darker side of storytelling. With her daring, frightening and suspensful novels, A.K. Alexander writes for those readers who like to be thrilled and kept in the dark up until the very end…

A.K.’s gritty thrillers keep you looking over your shoulder as the suspense mounts with each turn of the page. Mingling her love of horses with a world of deceit, violence and desire, A.K. brings to life murder mysteries that engage her readers.

Her gripping books are impossible to put down, featuring strong characters with complicated lives. A.K.’s books have appeared on The Wall Street Journal’s and Amazon’s Kindle bestseller lists.

About this author
From the moment she decided on a degree in Equestrian Studies, Jen Greyson’s life has been one unscripted adventure after another. Leaving the cowboy state of Wyoming to train show horses in France, Switzerland, and Germany, she’s lived life without much of a plan, but always a book in her suitcase. Now a wife and mom to two young boys, she relies on her adventurous, passionate characters to be the risk- takers.

Jen also ghost writes billionaire legacies and romance novellas when she’s not enjoying the wilds of the west via wakeboard or snowmobile.