Praise for THE NEVER TILTING WORLD

“The Never Tilting World is what happens when Garth Nix meets Mad Max: Fury Road. It’s a dark, lovely, and even timely look at a world that’s fallen apart, with just the right blend of epic action and twisted magic.” ―Tara Sim, author of Timekeeper

“Dark and richly drawn, The Never Tilting World is a lavish fantasy about sisterhood, sacrifice, and finding strength in a treacherous world. Chupeco’s writing is lushly descriptive, transporting me to the brink of the abyss; while reading it, I could swear the world stood still.” ―Heidi Heilig, author of For a Muse of Fire

“Complex, brutal, romantic, and terrifying. With a phenomenal cast of characters who stick to your bones and vivid worldbuilding that shows up in your dreams, this is a book that demands to be experienced.” ―Dahlia Adler, author of Under the Lights and editor of His Hideous Heart 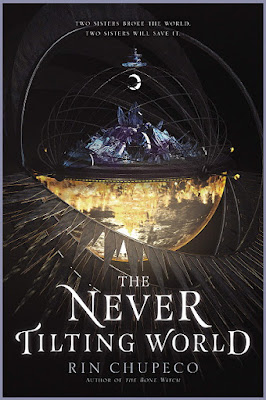 Generations of twin goddesses have long ruled Aeon. But seventeen years ago, one sister’s betrayal defied an ancient prophecy and split their world in two. The planet ceased to spin, and a Great Abyss now divides two realms: one cloaked in perpetual night, the other scorched by an unrelenting sun.

While one sister rules Aranth—a frozen city surrounded by a storm-wracked sea —her twin inhabits the sand-locked Golden City. Each goddess has raised a daughter, and each keeps her own secrets about her sister’s betrayal.

But when shadowy forces begin to call their daughters, Odessa and Haidee, back to the site of the Breaking, the two young goddesses —along with a powerful healer from Aranth, and a mouthy desert scavenger —set out on separate journeys across treacherous wastelands, desperate to heal their broken world. No matter the sacrifice it demands.

You can purchase The Never Tilting World at the following Retailers:

My Review
*Note- I first want to apologize that I don't have this book finished yet. I have had a death in the family and a baby shower to host that has taken a lot of my time in the past week.  So I will come back and finish my review in a day or 2...I know it will be quick, because it is already amazing!!

The Never Tilting World has two worlds in one. Both with harsh conditions, both trying to survive the best they can.

Already, I have fallen for these intense characters and can't wait to dive in deeper into the complex worlds divided.  Just look at the cover!  How can you not want to dive into the dark fantasy and learn of their magical gifts....

This is a fantastic read full of mystery, fantasy, with major adventure...two adventures that will clash at the end with a cliff hanger that...ugh....cliff hangers...you love them and hate them at the same time....

You go back and forth between the two goddesses, learn about the lies and deception they have lived their whole life...however each young goddess wants to do whatever they can to make the world right again. Neither know the other still exists. Each struggle with different adventures to make it to the abyss....Odessa and Haidee have no idea what to do when they get to t he abyss, only that they have to go, being pulled by a power greater than themselves

Two Love stories that grow with each page turned...creative writing and imagination, this story is absolutely incredible!! I really can't wait to see where this story goes... 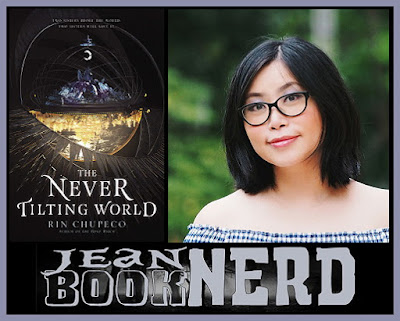 Rin Chupeco has written obscure manuals for complicated computer programs, talked people out of their money at event shows, and done many other terrible things. She now writes about ghosts and fantastic worlds but is still sometimes mistaken for a revenant. She is the author of The Girl from the Well, its sequel, The Suffering, and the Bone Witch trilogy.