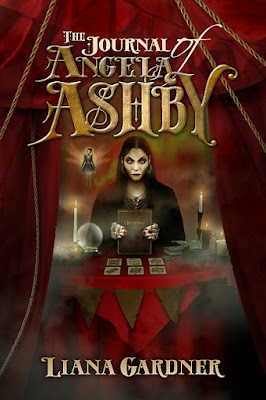 I have great power.
That’s what she told me. The old fortune-teller at the school carnival.
I thought I was doing the right thing … with the magic journal she gave me. But nothing could prepare me for what happened next.
Or, for what I unleashed.

At a school carnival, a mysterious fortune-teller gives twelve-year-old Angela Ashby a journal and warns her to use it wisely. Nothing prepares Angela for the journal’s power—when she pours her heart onto its pages her desires come true.

She tests the journal by conjuring a gnome, a unicorn, and a farting fairy and then uses it to stop the school bullies in their tracks. But the unintended consequences alienate her best friend and puts her favorite teacher in danger of losing her job.

After she shares her deepest desire of all—that her parents get back together—her adversary steals the journal, and Angela fears she will use it to bring mayhem to the entire school if she doesn’t get it back.

Praise for THE JOURNAL OF ANGELA ASHBY

"Gardner has created a likable character in Angela, who faces off with the class bully in defense of herself and her best friend. Alternately full of sass and seriousness, Angela quickly learns that writing in her new journal may lead to some unintended consequences, some hilarious and some grave. An enjoyable tween romp about the familiar world of bullies mixed with a bit of magic, this one would be great for a class read or group discussion." ―Seattle Book Review

"The Journal of Angela Ashby is a middle grade fiction by Liana Gardner and is perfectly written for the target audience. A combination of magic, childhood troubles, social messages, and the need to think before acting is prevalent, and a lesson well ingrained into the pages, There is some good tension building, injections of humour, and character development. Angela and Mallory make a great team, perfectly complementing each other in the way close friends do. This is certainly a book I will read with my son when he is older, as I think it instills some important lessons and values,much like the old 80's and 90's cartoons used to do. While the book itself has a clear beginning and end, there are hints that a sequel may follow, and it's certainly something I would consider picking up. If you're looking for a story of friendship, childhood problems, and a healthy sprinkling of magic in everyday life, then look no further." ―K.J. Simmill, Award-Winning British Author

"The Journal of Angela Ashby by Liana Gardner is a charming story of action and consequence. Gardner presents her characters and their problems with an equal touch of magic and reality. This allows the message of the tale to come through while entertaining instead of preaching. Gardner does a great job of taking what could be a clichéd story and putting a few twists in it to keep it fresh and humorous." ―Kris Moger, Readers' Favorite

"The Journal of Angela Ashby is an engaging and fun coming-of-age story about a twelve-year-old girl who is suddenly the possessor of great power. I loved following as Angela began to appreciate her journal's powers and realized the importance of carefully considering everything she wished for.Throughout the story, Gardner addresses the issue of bullies and bullying, which is something all kids and most adults have to deal with at some point, and she shows how Angela learns to differentiate between solving the problem and descending into bullying behavior herself.Gardner also admirably addresses the stress and confusion felt by kids and tweens when their mom and dad get divorced. The Journal of Angela Ashby is a marvelous fantasy that brings up real-life issues without lowering the magic and fun potential for a moment, and Sam Shearon's illustrations really make it all come alive most brilliantly." ―Jack Magnus, Author

At the end of school, Mallory and I went back to the athletic field. Tatiana flitted around the bushes like a hummingbird. We stopped and watched her. Amazing. Seeing a fairy zipping around school made my brain feel like it had skipped a gear. I couldn’t believe she was still here.
Why hadn’t she disappeared? Did it mean fairies really exist?
When she spied us, she zoomed straight to Mallory.
“You came back.” She sighed. “I’m so happy.”
Mallory blushed. “I told you I’d be back.”
“I thought you lied so you could ditch me.” She shook her finger in Mallory’s face. “I expected to have to hunt you down.”
Mallory held her hand out, palm up, for Tatiana to land on. “I keep my promises.”
“You should have been here earlier, Mallory. A frog pilgrimage passed by.”
Mallory shot me a frown, her eyes glaring at me over the top of her specs. What did she expect me to do? She knew I couldn’t reverse what had been written in the journal because Tatiana was still here.
Tatiana sank to a sitting position. “I tried to find out where they were headed, but they wouldn’t stop. Poor things looked dry, so I gave them a little rain cloud for their travels.”
What a weird and eerie sight it must have been—a trail of previously dead frogs hopping along with a low-flying cloud raining on them. It’s a good thing no one had wandered out on the athletic field during class.
“Then a black cat jumped out of the bushes and tried to pounce on the frogs, but I turned the rain cloud into a thunder cloud and shot lightning at it.” Tatiana’s squeaky voice sounded indignant. “The cat dove back into the bushes after it hissed at me.”
“Um, sorry we missed it.” Mallory crossed her legs and sank to the ground in a fluid motion, causing Tatiana’s wings to flutter. “I’ve been reading about malachite and its properties. It’s very interesting.”
When had she had time since this morning to do more reading about her crystal?
She rolled her eyes. “Don’t look at me like that … I looked it up when we were in the library after you set the frogs free.”
I sank down next to her. Typical. Mallory couldn’t stand not to know something. So when the rest of us were pretending to read about frogs, she looked up crystals instead.
“You let the frogs go, Angela? You’re the best.” Tatiana practically swooned.
Mallory sighed. “Anyway, malachite has been used for thousands of years for healing, protection, drawing out negative emotions, and clarifying intention.” She ticked the uses off on her fingers. “I’m sure that’s why Madame Vadoma gave it to me.”
“What’s why?” I didn’t see how that explained anything.
“She gave you the journal for a reason. I’m not sure what that is yet, but she must have known you’d need some help, especially with intention.”

What an AMAZING middle grade read!

I fell in love with the story of a magical Journal!
It fits perfect with the age because what middle grade girl doesn't keep some sort of Diary?

This story has more than magic. It deals with real life situations... Divorce... Bullying... Friendships...while teaching that your decisions causes a chain reaction, and how it can affect those around you without intending to. It also teaches you to learn from your mistakes.

Fairies, Gnomes, and unicorns...oh I love the imagination!
(to only be 12 again!)

The Journal of Angela Ashby is so beautifully written. It's funny, exciting, and completely satisfying to drive into. From the first page to the last, the story flows without disturbance.  Angela and Mallory's friendship is pure. I highly recommend this read! 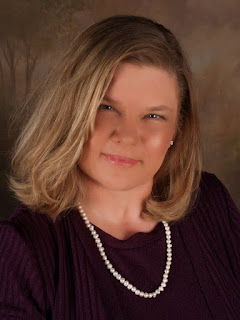 Liana Gardner is the award-winning author of 7th Grade Revolution and the Misfit McCabeseries. Daughter of a rocket scientist and an artist, Liana combines the traits of both into a quirky yet pragmatic writer and in everything sees the story lurking beneath the surface. Engaged in a battle against leukemia and lymphoma, Liana spends much of her time at home, but allows her imagination to take her wherever she wants to go.

She fostered her love of writing after reading Louisa May Alcott’s Little Women and discovering she had a great deal in common with the character Jo. The making up of stories, dramatic feelings, and a quick temper were enough for her to know she and Jo would have been kindred spirits. 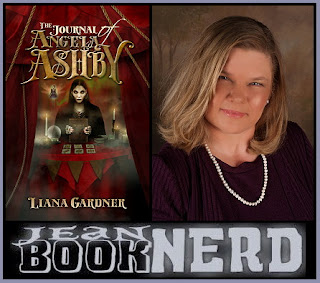