THE BOOK OF M by Peng Shepherd Official Blog Tour 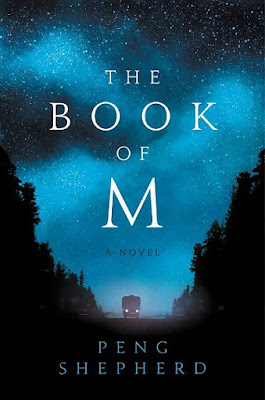 Set in a dangerous near future world, The Book of M tells the captivating story of a group of ordinary people caught in an extraordinary catastrophe who risk everything to save the ones they love. It is a sweeping debut that illuminates the power that memories have not only on the heart, but on the world itself.

One afternoon at an outdoor market in India, a man’s shadow disappears—an occurrence science cannot explain. He is only the first. The phenomenon spreads like a plague, and while those afflicted gain a strange new power, it comes at a horrible price: the loss of all their memories.

Ory and his wife Max have escaped the Forgetting so far by hiding in an abandoned hotel deep in the woods. Their new life feels almost normal, until one day Max’s shadow disappears too.

Knowing that the more she forgets, the more dangerous she will become to Ory, Max runs away. But Ory refuses to give up the time they have left together. Desperate to find Max before her memory disappears completely, he follows her trail across a perilous, unrecognizable world, braving the threat of roaming bandits, the call to a new war being waged on the ruins of the capital, and the rise of a sinister cult that worships the shadowless.

As they journey, each searches for answers: for Ory, about love, about survival, about hope; and for Max, about a new force growing in the south that may hold the cure.
AMAZON | BARNES & NOBLE | BOOK DEPOSITORY
Praise for THE BOOK OF M“A beautiful and haunting story about the power of memory and the necessity of human connection, this book is a post-apocalyptic masterpiece and the one dystopian novel you really need to read this year.” ―Bustle“I was both disturbed and inspired by Max’s and Ory’s journey through apocalypses large and small. Peng Shepherd has written a prescient, dark fable for the now and for the soon-to-be. The Book of M is our beautiful nightmare shadow.” ―Paul Tremblay, author of A Head Full of Ghosts and The Cabin at the End of the World“The Book of M is exciting, imaginative, unique, and beautiful. Shepherd proves herself not just a writer to watch, but a writer to treasure.” ―Darin Strauss, bestselling author of Half a Life“Prepare to fall in love with your own shadow. And to lose sleep. Shepherd is urgently good, and has written one of those books that makes you look up at two in the morning, to a world that’s new, newly scary, and freshly appreciated: what all the great stories do.” ―David Lipsky, New York Times bestselling author of Although of Course You End Up Becoming Yourself and Absolutely American“A beautifully written existential apocalypse, following everyday people on a search for love, memory and meaning across the richly realized and frighteningly familiar ruins of America.” ―Christopher Brown, author of Tropic of Kansas“Sheperd’s debut is graceful and riveting, slowly peeling back layers of an intricately constructed and unsettling alternate future.” ―Publishers Weekly“First-time novelist Shepherd has crafted an engaging and twisty tale about memory’s impact on who or what we become. For aficionados of literary dystopian fiction such as Emily St. John Mandel’s Station Eleven or those who enjoy stories of cross-country travel.” ―Library Journal“Fans of Station Eleven, listen up!...This one is g-r-e-a-t.” ―Book Riot“Eerie, dark, and compelling, this will not disappoint lovers of The Passage (2010) and Station Eleven (2014).” ―Booklist“Brilliant debut... The Book of M is right up there with Station Eleven: achingly beautiful literary novels about a changed world.” ―Refinery29.com“Outstanding and unforgettable...The Book of M is a scary, surprising, sad and sentimental story that will be deeply felt by readers while capturing their imaginations and hearts.” ―BookPage (Top Fiction Pick)“For fans of Station Eleven, this summer release will have you engulfed from beginning to end.” ―Popsugar“[Shepherd’s] first novel, The Book of M, tells the fantastic story of ordinary people caught up in a catastrophe in which people lose their shadows — and their memories.” ―Arizona PBS“Beautifully written, Peng Shepherd delivers an extraordinary story about love, hope, the unquenchable search for answers that may never come, and, ultimately, survival...The characters all have such depth to them that it’s impossible to not become invested in the story, which twists and turns often.” ―TheRealBookSpy.com“The Book of M tells the captivating story of a group of ordinary people caught in an extraordinary catastrophe who risk everything to save the ones they love. It is a sweeping debut that illuminates the power that memories have not only on the heart, but on the world itself.” ―TheNerdDaily.com“It’s a great setting for a murder, and each of Rader-Day’s prickly millennials feels capable of murder—to say nothing of sleep-deprived, near hysterical Eden. Readers will have fun following the subtle clues.” ―Publishers Weekly“Reminiscent of books like Stephen King’s The Stand, Emily St. John Mandel’s Station Eleven, and Michael Tolkin’s NK3... she keeps the journey interesting, makes us care about her characters, and invites us to think about how we are all the stuff of dreams.” ―Toronto Star“The Book of M shines consistently, first in the sense of magical wonder that permeates each of its pages, and second, in the emotional depth that Shepherd is able to draw out of her characters... brutal and brilliant in equal measure.” ―The Contemporary Clerk“Shepherd’s tale pushes the post-apocalyptic story in a new and exciting direction, making readers ponder questions about reality, self-perception and relationships.” ―Shelf Awareness

This novel will push you to think, compel you to remember the special moments, and cherish the smallest, irrelevant memories you have.

Hemu Joshi was the first. The first person to lose his shadow.  The world was in awe of this phenomenon. Until it slowly started to spread. Until the world found out he started to forget.  Until the forgetting became known throughout the world and drove all of society into mass destruction....turning into an apocalypse.

Ory and Max are the only ones left in the lodge where they were attending a wedding reception for friends when the news hit.  Gradually, people forgot...forgot who they were, their loved ones, to eat, sleep, breathe...For two years Ory and Max survived on their own. Then the unspeakable happened...Max lost her shadow. Max runs away to protect Ory from heartache, however Ory can't just let her go...it's not in his soul to just forget her. So he leaves to try the impossible and find her.

This Dystopian post-apocalyptic masterpiece is packed with emotion.  The words tumble off the pages and manifests in your mind's eye, bringing the story life with alluring words. It's beauty is harsh and dramatic. It's beauty is hope and determination. It's beauty is life and death.

From the first word "The" to the last word "fifty-Two", it's a story that you won't be able to put down. Adventure, twists....(oh boy is there a twist that still has my panties in a bunch),  and a fantastic story with brilliant imagination, don't miss out on this read.  IT. IS. A. MUST.

I will start a journal again. 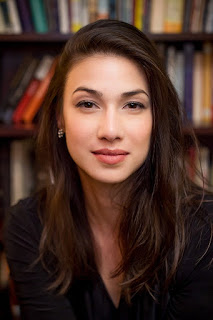 Peng Shepherd was born and raised in Phoenix, Arizona, where she rode horses and trained in classical ballet. She earned her M.F.A. in creative writing from New York University, and has lived in Beijing, London, Los Angeles, Washington D.C., Philadelphia, and New York. The Book of M is her first novel. 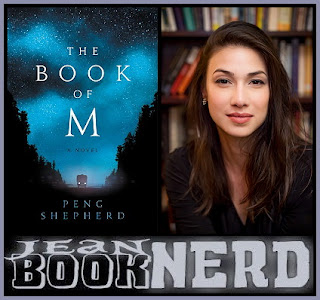 - 10 Winners will receive a Copy of THE BOOK OF M by Peng Shepherd.