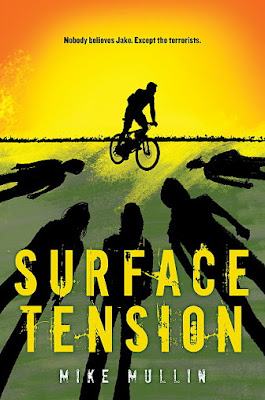 After witnessing an act of domestic terrorism while training on his bike, Jake is found near death, with a serious head injury and unable to remember the plane crash or the aftermath that landed him in the hospital.

A terrorist leader’s teenage daughter, Betsy, is sent to kill Jake and eliminate him as a possible witness. When Jake’s mother blames his head injury for his tales of attempted murder, he has to rely on his girlfriend, Laurissa, to help him escape the killers and the law enforcement agents convinced that Jake himself had a role in the crash.

Mullin's premise is riveting and timely . . . a strong action story that touches lightly on topics of grave complexity. ―Publishers Weekly

[A] fast-paced thriller. . . there is something of Hitchcock in the narrative, with a blend between The Man Who Knew Too Much, North by Northwest, and Rear Window, and the story...is gripping and frightening. ―VOYA 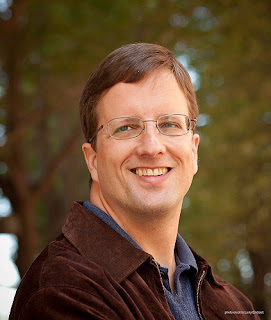 Mike Mullin’s first job was scraping the gum off the undersides of desks at his high school. From there, things went steadily downhill. He almost got fired by the owner of a bookstore due to his poor taste in earrings. He worked at a place that showed slides of poopy diapers during lunch (it did cut down on the cafeteria budget). The hazing process at the next company included eating live termites raised by the resident entomologist, so that didn’t last long either. For a while Mike juggled bottles at a wine shop, sometimes to disastrous effect. Oh, and then there was the job where swarms of wasps occasionally tried to chase him off ladders. So he’s really glad this writing thing seems to be working out.

Mike holds a black belt in Songahm Taekwondo. He lives in Indianapolis with his wife and her three cats. His debut novel, Ashfall, was named one of the top five young adult novels of 2011 by National Public Radio, a Best Teen Book of 2011 by Kirkus Reviews, and a New Voices selection by the American Booksellers Association. He is represented by Kate Testerman of kt literary. 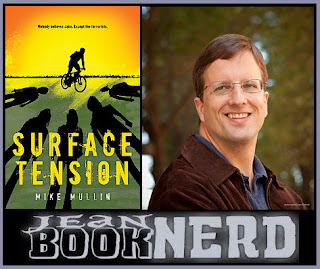 - 3 Winners will receive a Copy of SURFACE TENSION by Mike Mullin.