For the Record by Charlotte Huang Blog Tour and Giveaway 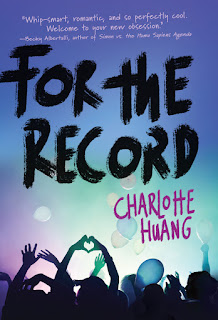 If Almost Famous were a YA novel... a raw, honest debut celebrating music, friendship, romance, and life on the road.

Chelsea thought she knew what being a rock star was like... until she became one. After losing a TV talent show, she slid back into small-town anonymity. But one phone call changed everything

Now she’s the lead singer of the band Melbourne, performing in sold-out clubs every night and living on a bus with three gorgeous and talented guys. The bummer is that the band barely tolerates her. And when teen heartthrob Lucas Rivers take an interest in her, Chelsea is suddenly famous, bringing Melbourne to the next level—not that they’re happy about that. Her feelings for Beckett, Melbourne’s bassist, are making life even more complicated.

Chelsea only has the summer tour to make the band—and their fans—love her. If she doesn’t, she’ll be back in Michigan for senior year, dying a slow death. The paparazzi, the haters, the grueling schedule... Chelsea believed she could handle it. But what if she can’t?

I was super excited to dive into this book because I have a teenage daughter who dreams of making it big in the music business. Daily, I hear her sing, play the piano, and strum the guitar. She has even stepped up her game by writing her own songs.  So I instantly knew I would connect with this story, and yes, I told her she HAS to read For The Record.

Chelsea is dying to get out of her small town, and move on.  With the disappointment of the talent show, and a difficult situation at school, she needs out.

When she is offered to be the lead singer of the well known rock band called Melbourne, her summer and life will forever be changed as she goes on tour.

This book was so much fun to read....you will cruise through it as fast as the tour. I adored the realistic feel to this story.  Chelsea has huge shoes to fill, coming into a band that has such a strong history and friendship.  They definitely don't make it easy for her, however Chelsea takes it pretty well.  She works hard to prove that she deserves to be there..but not without struggles and the learning experience of life on the road and the paparazzi.  Stardom does not go to Chelsea's head, and she is very humble giving autographs and meeting with fans.

This book is not without the gasping twist, which you learn towards the end of the story which makes you completely understand Pem at the end.  The attraction is undeniable between Chelsea and Beckett. I wanted them to be together even though she was dating the heart throb Lucas.

This book will surprise you...entertain you...and revive your love for music.  A great surprise that you will just adore, you will discover lyrics to the songs that made Melbourne rock stars.  I hope that isn't a spoiler, because I thought that just totally rocked!! 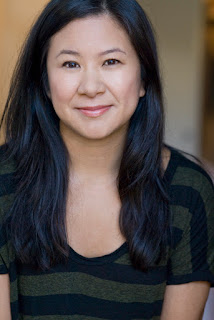 Charlotte Huang is a graduate of Smith College and received an MBA from Columbia Business School, which is clearly something every aspiring writer should do. When not glued to her computer, she cheers her two sons on at sporting events and sometimes manages to stay up late enough to check out bands with her music agent husband. Charlotte lives in Los Angeles and is the author of For the Record  (Delacorte, 2015)

GIVEAWAY
One Winner will get a signed copy of FOR THE RECORD + a swag pack
Ships in US Only | Must be 13+ To Enter
Sweeps/Giveaway accounts are ineligible. See Terms & Conditions for more info

Email ThisBlogThis!Share to TwitterShare to FacebookShare to Pinterest
Labels: 2015 Book Review, Book Review, Charlotte Huang, For the Record, Giveaway, Me My Shelf and I