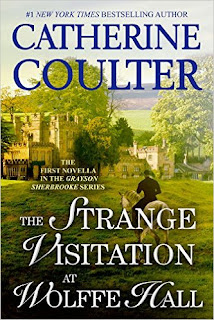 The year is 1841 and Grayson Sherbrooke, a popular author of gothic paranormal mysteries, lives on the coast of Northern England with his 4-year-old-son, Pip. He's asked by a neighboring little girl, P.C., to come to Wolffe Hall because something terrible is threatening her and her mother. She's come to Grayson because she's confused him with his fictional hero, Thomas Straithmore, who overcomes all obstacles and always triumphs over otherworldly evil. Thus, to her mind, Thomas is the only one to save them. She describes the house shaking with terrifying tremors and a huge black hole she calls the Abyss appearing in the entrance hall. She also knows the menace involves her great grandfather, known as The Great. He's obsessed with collecting and returning the famous Waterloo medals to the soldiers of the great battle of 1815, but he refuses to tell anyone why he's doing it. Grayson is soon embroiled in a mystery involving a wrongful death on the battlefield at Waterloo and a paranormal force that threatens the very lives of those living in Wolffe Hall.

Catherine Coulter is the New York Times bestselling author of 75 books. Her hugely popular FBI thrillers include The Cove, The Maze, The Target, The Edge, Riptide, Hemlock Bay, Eleventh House, Blindside, Blowout, Point Blank, Double Take, Tail Spin, Knockout, Whiplash, Split Second, Backfire, Bombshell, Power Play and Nemesis. She has a new international thriller series -- A Brit in the FBI -- co-written with JT Ellison. These include The Final Cut, The Lost Key and The End Game. Also coming out soon is the first in her novella series, starring Grayson Sherbrooke (from the Sherbrooke historical romance series), titled The Strange Visitation at Wolffe Hall. Coulter lives in northern California with her three thriller cats and her thriller husband.


a Rafflecopter giveaway
Posted by Insane About Books at 7:13 PM