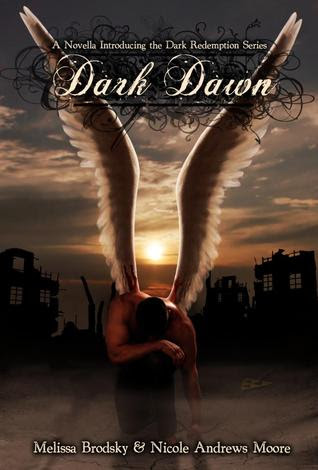 
n the beginning God made the heavens and the earth, and everything in between. The In-between was unplanned, unexpected, and unwelcome. Every action causes a reaction and when mankind was born, so were the Fae. Suddenly it was up to Heaven to save Earth. God created Angels to right his wrong, to save human kind. A deal was made, an agreement of sorts. The Angels would protect humanity from Fae domination and destruction, and in return they would have inhuman strength and immortality. Thus a time of angels swooping in to save humans from free will, bad decisions, and big mistakes began. They protected humans from the Fae who intentionally enslaved them, leaving shells of humans, or worse, leaving nothing at all. Even God doesn’t always learn from mistakes. Angels were given freedom of choice. Some Angels chose wrong. When some of them spread their wings, they went too far, and just as Icharus was punished for getting too close to the sun, they were punished for getting too close to mankind. So they fell. Falling was the easy part.

When God created man in his own image, he made a world for them that was peaceful. However, what God did not plan for, for all good, there has to be evil to make the balance. Because of this, he created his Angels, the Guardians, to protect the humans from the evil Fae that they have no idea they exist.

Seth, Eli, Anna, Zoey, Caim and Gus all possess special powers to aid in their battle against the Fae. However, over thousands of years, their patience starts to wear thin over that chaos. And to make matters worse, they struggle to keep their emotions at bay from the humans and each other.

When an important artifact is missing, God demands that they retrieve it right away. If it gets into the hands of the Fae, God’s world will fall into ruins.

Dark Dawn is an awesome read that will keep your attention from beginning to end. It begins AT the very beginning with Adam and Eve, with God realizing his mistake, and his creation of the Angels to guard them. I found that beginning very important to learn about the angels and their relationship with each other. The plot thickens with the angels temptation and the missing artifact. The Fae are just plain evil. The characters each have their own unique personalities, which you see instantly how they all fit together. The Guardians loyalty is true, however their doubt raises slowly when they question God’s action, and struggle with their own emotions that have been building over the centuries. It’s a fun fast read that will intrigue your mind with the twists and unexpected turns.

My Over All Rating:

Melissa used to tell everyone she was going to be a writer when she grew up. Well, she is suddenly a grown up and it looks like she was telling the truth.Living in a modern-day "Yours, Mine and Ours" household, Melissa is the biological mother of 3 children and the full-time stepmother to her husbands 2 children. On some days, she may even be considered "evil"...and not just as the stepmother!With a strange vampire fascination since she was young, it was only natural that Melissa began writing stories about the Paranormal. She is currently co-authoring a Paranormal Romance trilogy with fellow writer Nicole Andrews Moore called "The Dark Redemption Series". Book 1 is due out in June 2013.And because she has so much free time on her hands, Melissa is also working on a YA Paranormal Series, the first book "Hallows Haven" will be available late summer.

Nicki has lived in Charlotte, North Carolina with her children for the past eleven years and her husband for the past two and a half. Her journey has barely begun and she's loving every minute of it. Every day of her life seems to bring new adventures, some bigger, better, shinier and prettier than others. She's still getting used to that new life smell she's experiencing, a combination of hope, love, and happiness. (The perfect scents to build a new life on...)For fun, she spends time with those she cares about, cooks, reads, writes, and especially lives to travel. The current travel goal: visit every Margaritaville. Two down! (Eleven to go?)In addition to writing on Suddenly Single Journey, Nicki blogs at What Dreamers Do. Her writing can also be found on Shine, where she is a Shine Parenting Guru and an award winning Yahoo! Contributor on YourWisdom as the relationship and dating expert. And she has been published by McClatchy News in their syndicated papers.

Posted by Anonymous at 8:00 AM