Rarity from the Hollow by Robert Eggleton Spotlight

A Universe On the Edge

RARITY FROM THE HOLLOW 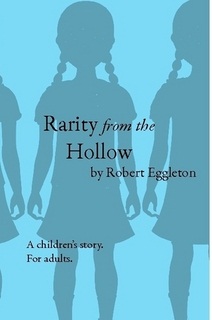 Lacy Dawn is a little girl who lives in a magical forest where all the trees love her and she has a space alien friend who adores her and wants to make her queen of the universe. What’s more, all the boys admire her for her beauty and brains. Mommy is very beautiful and Daddy is very smart, and Daddy’s boss loves them all.

Lacy Dawn, the eleven year old protagonist, perches precariously between the psychosis of childhood and the multiple neuroses of adolescence, buffeted by powerful gusts of budding sexuality and infused with a yearning to escape the grim and brutal life of a rural Appalachian existence. In this world, Daddy is a drunk with severe PTSD, and Mommy is an insecure wraith. The boss is a dodgy lecher, not above leering at the flat chest of an eleven-year-old girl.

Yes, all in one book.

Praise for the Book:

Rarity From The Hollow is written in a simple declarative style that’s well- suited to the imaginary diary of a desperate but intelligent eleven-year-old – the story bumping joyfully between the extraordinary and the banal.
The central planet of the universe is a vast shopping mall, and Lacy Dawn must save her world from a menace that arrives in the form of a cockroach infestation. Look again and the space alien has made Daddy smart and happy – or at least an eleven year old girl’s notion of what a smart and happy man should be. He has also made Mommy beautiful, giving her false teeth and getting the food stamp lady off her back.
About the only thing in the book that is believable is the nature of the narrative voice, and it is utterly compelling. You find yourself convinced that “Hollow” was written as a diary-based autobiography by a young girl and the banal stems from the limits of her environment, the extraordinary from her megalomania. And that’s what gives Rarity From The Hollow a chilling, engaging verisimilitude that deftly feeds on both the utter absurdity of the characters’ motivations and on the progression of the plot.
Indeed, there are moments of utter darkness: In one sequence, Lacy Dawn remarks matter-of-factly that a classmate was whipped to death, and notes that the assailant, the girl’s father, had to change his underpants afterward because they were soiled with semen. Odd, and often chilling notes, abound.
As I was reading it, I remembered when I first read Vonnegut’s “Cat’s Cradle” at the age of 14. A veteran of Swift, Heller, and Frederick Brown, I understood absurdist humour in satire, but Vonnegut took that understanding and turned it on its ear.
In the spirit of Vonnegut, Eggleton (a psychotherapist focused on the adolescent patient) takes the genre and gives it another quarter turn. A lot of people hated Vonnegut, saying he didn’t know the rules of good writing. But that wasn’t true. Vonnegut knew the rules quite well, he just chose to ignore them, and that is what is happening in Eggleton’s novel, as well.
Not everyone will like Rarity From The Hollow. Nonetheless, it should not be ignored.

Rarity from the Hollow by Robert Eggleton is the most enjoyable science fiction novel I have read in several years. Who could think of an intergalactic handbook for entrepreneurs? Who could turn a tree-hugger into a paranormal event of death-defying significance? Who could create characters so believable, so funny, so astonishingly human (and not)?
Robert Eggleton, that’s who.
I put this book on my IPhone, and it followed me everywhere for several days. Strangers smiled politely at my unexpected laughter in the men’s room toilet stall. They looked away as I emerged, waving the IPhone at them as if it might explain something significant.
Oddly, the novel explains a great deal that has become significant in our society. Rarity from the Hollow is satire at its best and highest level. It is a psychological thriller, true to traits of mankind (and other species). It is an animal rights dissertation (you will laugh when you understand why I write that). It celebrates the vilest insect on earth (make that Universe).
The characters created by Robert Eggleton will bug your brain long after you smoke, uh, read the final page. Thanks for the laughs, the serious thoughts, the absolute wonder of your mind, Mr. Eggleton. A truly magnificent job.

Robert Eggleton is best known for his investigative reports about children’s programs. Today, he is a recently retired psychotherapist at the Mental Health Center in Charleston,West Virginia. Rarity from the Hollow is his debut novel and followed publication of three short Lacy Dawn adventures. Author proceeds are donated to a child abuse prevention program operated by Children’s Home Society of West Virginia.

Email ThisBlogThis!Share to TwitterShare to FacebookShare to Pinterest
Labels: Rarity from the Hollow, Robert Eggleton, Spotlight