I was SO excited when Suzy Turner contacted me to do a Blog Tour of December Moon. I had just started my blog, and I was honored that she wanted to give me a chance to be one of the few to tour. So, I'm going to first start with my review of Raven, just to get you hooked, and then a blurb from December Moon.


Her whole life had been based on a lie. Lilly had grown up in a loveless home with a father who she had barely ever seen and a mother who was... well, not very motherly.
After they mysteriously disappear without a trace, Lilly is sent to Canada where she finds a whole new way of life. A life filled with love and people who care for her. But that's not all she discovers, Lilly also finds out that she isn't who, or what, she thinks she is.
Lilly has a very special ability and it's just a matter of time before her true self starts to shine. And when it does, her life will never be the same again

Raven will grab your soul.

Lilly was growing up in a loveless family. She never had a friend until she met a new girl at school, December Moon. Lilly had to keep that friendship hidden.

One day, her parents disappeared, and she had to move to Canada to live with a grandfather she had never met. She never knew that she had an extended family, all dying to meet her and shower her with love.

However, Lilly started to have dreams, dreams that did not make sense to her. She knew her grandfather was keeping secrets, and one day he had to reveal the truth. On top of learning that the world could be a loving place, she also learned that all those Fairy Tales her father would sneak to her, may not just be fairy tales.

Raven is an incredible story about a girl who is so sheltered, but definitely intelligent. Lilly is a very strong character, who takes everything thrown at her gracefully. Raven is suspenseful. Each chapter built on top of the other to lead you to an incredible ending. I had such a difficult time putting it down because I just NEEDED to know what happened next.


My Over All Rating:

And now, I introduce to you, the second book in the saga, December Moon..... 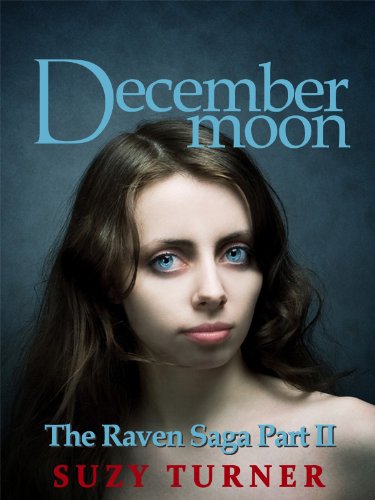 EXCERPT OF DECEMBER MOON
December Moon had no idea that she was a witch.
She had never given it a single thought. Why would she?
Well, she hadn't given it a single thought until the day before her fifteenth birthday when she had silently wished that the gymnasium would flood. She was sick of humiliating herself with her rather serious lack of elegance on the floor... pointed out, rather loudly, by her fellow gymnasts. The other girls looked impressive, as they fluttered about the room like brightly coloured butterflies, full of elegance and composure. December, on the other hand, thought herself more akin to Alice in Wonderland's caterpillar.
Imagine December's surprise when she began to hear the gentle whooshing sound that usually accompanies an overflowing bathtub. A noise that slowly became louder and louder, until water literally began pouring into the gymnasium from all directions. And it wasn't even raining.
“What the...?” Miss Finnegan screeched.
“Everybody form an orderly line and exit the gymnasium as soon as you can!” she yelled in her posh English accent to her students, after turning puce from blowing so hard on the red whistle that always hung around her taut, blotchy neck.
December knew something wasn't quite right with the whole scenario, considering the gymnasium had never posed a flood threat before and the fact that there was no plumbing anywhere near the building. The changing rooms were situated at the far end of the school... a design she had never quite understood.
As all the girls and boys panicked and flocked to the exit in one mad rush, December slowly took her time. It was only water, after all, and a little bit of water never hurt anyone. Well, it had never hurt me, she thought. Exactly at that moment, the water that had begun seeping into her black plimsolls and wetting her feet, receded, leaving her feet and ankles entirely, and strangely, dry.
Eyes wide in amazement, December surveyed the scene around her as one last student ran across the large mat in the centre of the room, it squelching beneath her feet. She was the last to leave. Even Miss Finnegan hadn't waited to make sure all her students had escaped unharmed and dry.
The water continued to pour in from each corner of the room, large droplets plopping around her from the ceiling and walls. Bits of green painted plaster broke away from the wall and fell down, bobbing up and down in the ankle high water below. December looked down at the floor and noticed that water was everywhere except within a small circular area surrounding her feet. As she moved, the dry circular area moved with her, like a bouncing bubble.
Before she could work out what was happening, gymnasium equipment began to fall and crash to the floor with the force of the running water.
How can this be? She thought. Then she remembered her silent wish, surely not? No, there had to be a rational explanation to all of this. I couldn't possibly be responsible. But the dry bubble around her told her a very different story.
As much as December wanted to hang around and enjoy watching the gym fill up with water, abruptly putting an end to her least favourite subject, she knew Miss Finnegan would eventually notice she was missing. So she skipped from the flooded room and out into the unusually bright sunlight of the October English afternoon.

Awesome, Right?? I know you won't be a bit disappointed!!

Here are the other stops on the tour!!
September 3rd
http://www.ingasilbergbooks.com/


Have Fun following the tour, and learing more about Raven, December Moon, and Suzy Turner. Thanks Suzy for including me!