#YAFANDOMFRENZY All about James Dashner

So in October, my Daughter and I sent to the Chicago area with a fellow blogger friend of mine, Stacey from PageTurners Blog.

We had so much fun. It was a weekend event, however we just went up on Sunday.
I was really excited about this because James Dashner was going to be there.  SQUEEEE!! 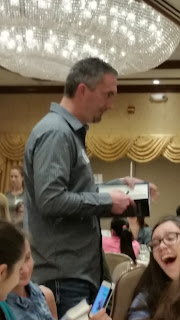 I have many many more pictures of him because I kind of was stalking him.
What was so funny, was when we first got there and checked in, I went to the bookstore that was set up in another room to buy some books to be signed.  I already had 7 Dashner books in my bag that I brought from home...anyho, walk down this hall, and there is James just sitting on a couch. I secretly was fan girling in my head...THEN in the book store, I browsing for the many books that I want, and there is James, standing right next to me buying books too. What a moment...I told him I already had my Dashner books.  But what a cool guy he is, he bought a whole stack of books for this young reader that was standing in line. Class act. 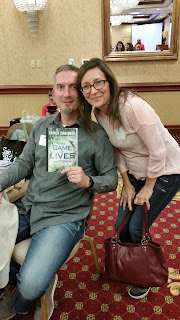 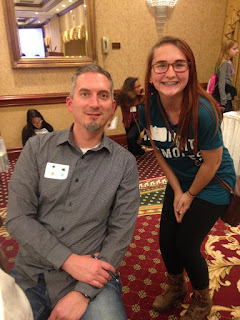 Just earlier that week, I received a surprise package from #Firstinline.

I complete set of The Eye of Mind Series.

And James was super excited to sign the last installment. It was a manuscript copy, first one he had seen, and very FIRST one he had signed.....Yes, I'm a lucky girl. 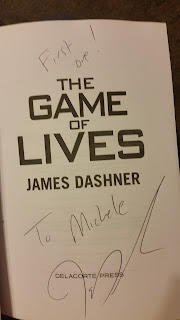 Posted by Insane About Books at 9:07 PM