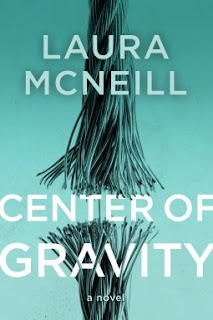 Center of Gravity
A Novel
By Laura McNeill
Summer 2015’s Sharpest Domestic Suspense Novel
SECRETS, LIES, AND A SINGLE MOTHER FIGHTING FOR HER LIFE COLLIDE IN THE DEEP SOUTH
“A compelling, fierce, and ultimately hopeful tale. McNeill is a writer to watch.”
-- Joshilyn Jackson, NYT and USA Today bestselling author of Someone Else’s Love Story
“A heart stopping, nail-biting suspense novel that held me captive. Evocative writing and a compelling voice add to the mesmerizing effect of this excellent debut. I’ll be looking for her next book!”
-- Colleen Coble, author of The Inn at Ocean’s Edge and the Hope Beach novels

Her whole life, Ava Carson has been sure of one thing: she doesn’t measure up to her mother’s expectations. So when devastatingly handsome and successful Mitchell Carson sweeps into her life with his adorable son, a ready-made family seems like a dream come true. In the blink of an eye, she’s married, has a new baby, and life is grand.
Or is it?

In Center of Gravity [July 14, 2015, Thomas Nelson], the forthcoming novel from award-winning writer Laura McNeill, not all is as it seems – and Ava Carson is forced to become stronger than she’s ever known herself to be.

An evocative and skillfully crafted addition to the emerging domestic suspense genre,Center of Gravity is told in several voices: Ava’s and Mitchell’s, but also that of Jack, their superhero-obsessed eight-year-old from Mitchell’s first marriage, as well as Graham Thomas, a newcomer to town who will prove more central to the breakdown of it all than anyone could’ve predicted.
Immersing its reader in an idyllic, affluent coastal Alabama landscape while steadily weaving its protagonist into an impossible web of domestic discord, the consequences of rejecting southern mores, and a mother’s unbreakable love for her children, Center of Gravity keeps its reader sharply on the edge of their seat from first page to last.

“I’ve discovered that nearly everyone I talk to, virtually everyone who’s been through a breakup, has a story of darkness to tell,” McNeill explains of her inspiration to pen Center of Gravity. “This is a novel about the lies we tell ourselves and the lies we are told. It’s about the unfailing truth that things, and people, are not always what they seem. And it’s not my story. It’s everyone’s story.”

Among the timely topics and themes Center of Gravity explores include:
About the Author:

After six years behind the anchor desk at two CBS affiliates (where she earned awards from the Associated Press including Best News Anchor and Best Specialized Reporter), Laura McNeill moved to the Alabama Gulf Coast to raise her family. She holds a master’s degree in journalism from The Ohio State University, a bachelor’s degree in English from Clarion University of Pennsylvania, and is currently pursuing her MFA from New England College. An accomplished and award-winning author who has released four novels and one short story to date under the pen name Lauren Clark, Laura was recently awarded a two-book deal with Thomas Nelson Publishing, a division of HarperCollins.
Center of Gravity will be available in paperback and e-book formats via all major online retailers and in bookstores across North America as of July 14, 2015. It is currently available for pre-order.

This story gravitates your whole attention from beginning to end.  This intense suspense domestic thriller will make your toes curl, your stomach twist, and emotions on high overload with the unexpected torment Ava starts to endure because of her husband Mitchell's extreme jealousy.

As this story progresses, you watch Ava being a normal naive housewife.  However, as the situation unravels and her world is turned upside down, you watch her slowly grow into a strong fighting woman.

I usually don't read these books because the real life circumstances just scrapes my soul.  But I fell for Ava immediately.  You just can't deny her devotion to her children.  The unexpected twists made this story a hard one to put down.

I highly recommend this book.  It's fast paced, full of emotion, and has characters that you will love, and definitely those you will hate.